From Cambridge to Cape Town, Madrid to Manchester, Santiago to Stockholm, more than 25 cities are hosting transport hackathons, a new initiative from Youth For Public Transport (Y4PT).

Y4PT is organising local hackathons around the world, with the core aim of developing sustainable solutions to urban mobility challenges. Winners from each local hackathon will be rewarded with a fully-funded trip to Montreal, to compete in the first ever Y4PT Global Transport Hackathon. This event will take place in the context of the UITP Global Public Transport Summit, and will connect hackathon participants with professionals from a broad range of industries.

Local hackathons began in late 2016 and will continue to take place for the next two months. Winning ideas range from air-quality sensors, to bus loyalty programmes, to apps that encourage healthy mobility. 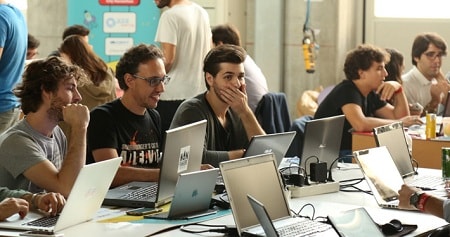 The hackathon environment encourages fresh perspectives and collaborative decision-making by bringing together participants from diverse backgrounds.

â€œA hackathon is a productive environment where everybodyâ€™s focus is on rapidly turning oneâ€™s vision into an actionable solution. It is fun, and the risk and fear of failure is low, thus giving developers a completely different perspective on programming than the one we have during working hoursâ€, said Igor Georgioski, winner of the Skopje, Macedonia hackathon.

Mr Georgioski was part of the Loyal Green team, who developed a cloud-based app that encourages carpooling, rewarding users with discounts to events and services. The app also provides up-to-date transport data, including bus timetables and route information, with the overall intention of reducing traffic congestion in Skopje.

â€œPublic transport plays an important role in our lives. Our app encourages people to leave their cars at home, thus reducing air pollution and improving parking problems, issues which are major problems in Skopje. People should be rewarded for using public transport, which is what our app doesâ€, said Mr Georgioski.

Asked to describe his vision of the future of public transport, Mr Georgioski responded, â€œIâ€™d like to see crazy-fast public transport, like the Hyperloop One, that run on electricity, and drones that will carry people!â€

According to the World Health Organisation, air pollution is the worldâ€™s most serious environmental health risk, responsible for as many as 5.5 million premature deaths each year. Team AIRÂ², winners of the Brescia, Italy hackathon, seek to address this health crisis with their innovative app that uses pollution data to suggest environmentally-friendly travel routes.

The app, designed to promote sustainable mobility, is connected to sensors that measure air quality around the city of Brescia, and can calculate travel routes with lower pollution rates. The data collected can also be used by public officials for more sustainable policy solutions.

Massimo Santi, who will be representing the winning team in Montreal, noted that the app could â€œprovide a better quality of life by suggesting less polluted places and routesâ€.

Mr Santi credited the hackathon environment for bringing together mobility-enthusiasts with different skillsets. â€œThe hackathon in Brescia was able to connect our competencies in a really stimulating way. The teams formed in the early stages of the event, but exchange of ideas and sharing of tips between teams happened all through the two days of the event.â€

Mr Canavera-Herreraâ€™s solution? An app that encourages public transport and walking, instead of driving, through an interactive reward scheme. The app includes a dynamic interface with a variety of alternative transport options, each coming with a different prize.

â€œPublic transport plays an important role in my life, in Cambridge and in my home city, BogotÃ¡, Colombia. It is my preferred way to move around the city, and for me, the time I spend using public transport is when I reflect on my day and my lifeâ€, said Mr Canavera-Herrera. â€œThe future of transport must be cleaner, inclusive, comfortable, affordable but especially attractive. If people do not feel attracted to use public transport, we will not solve any of our current transport problems.â€

Healthy mobility will be a central theme of the Global Transport Hackathon in Montreal. Representatives of winning regional teams will come together to turn their inventive ideas into tangible products, competing in this final round to develop the â€˜worldâ€™s best ground-breaking transport solutionâ€™.

The global hackathon will also give participants the chance to connect with industry professionals in an entrepreneurial atmosphere where innovation will be on display â€“ the Global Public Transport Summit includes the unveiling of world premieres, exhibitions of cutting-edge transport technology, and presentations from new mobility players.

Y4PTâ€™s hackathons are part of InnovHub. Click on the yellow bulb and find out more innovative initiatives.