On its 14th and latest edition, Railtex has once again proved it is the UK’s premier exhibition of railway equipment, systems and services. A total of 6700 visitors from 50 countries and almost 2500 professionals representing exhibiting companies gathered at the event at the Birmingham’s NEC.

The venue was transformed with a huge amount of technology, skills and services at some of the most eye-catching displays of the 420 exhibitors from 22 countries. The show also featured a comprehensive supporting programme of speeches, presentations and discussions. Innovation was showcased, leads created and business partnerships formed over three engaging days.

It is fascinating time to be part of the rail industry in the UK and this year’s event really defined that with numerous success stories and the overall buzz around the exhibition. Recent analysis by Oxford Economics, commissioned by the Railway Industry Association, showed that rail generates £36 billion in economic growth and £11 billion in tax revenue each year, whilst employing 600,000 people. It is a major industry and from the evidence of those at Railtex 2019, it is an industry in safe hands.

Darren Caplan, Chief Executive of the Railway Industry Association, commented: “Railtex has developed a reputation as a UK trade show leader for the rail supply industry, showcasing a vast range of products and services from across the sector. This year was no different, with Railtex once again bringing the industry together for three packed days of networking, discussions and events.”

Alstom reveals new Hydrogen train design at Railtex
One of the largest and most exciting transport companies in the world, Alstom chose Railtex to present a model of its hydrogen train design. Codenamed ‘Breeze’, it will be a conversion of existing Class 321 trains, reengineering some of the UK’s most reliable rolling stock, with the aim to create a clean train for the modern age.

Siemens Mobility used Railtex to reveal its latest high-speed offering, the Velaro Nova.
The train can reach speeds of up to 360km/h, offers 10% more space and uses 30% less energy than previous models. It also saves 1,373 tonnes of CO2 emissions a year. Siemens Mobility Limited has formally submitted its bid to supply and maintain 54 trains for Phase One of High Speed Two (HS2).

Connecting the old with the new
Launched at Railtex this year was EAO’s new Passenger Interface an inductive and USB phone charger. . It enhances the passenger’s journey by charging their phones and connecting them through iBeacon technology to the train operators travel app.

The big talking points
Beyond the main exhibition, Railtex 2019 brought together a host of experts to deliver keynote speeches and seminars, presentations and discussions with leading industry figures. Among those was Gordon Wakeford, Managing Director of Siemens Mobility and Co-Chair of the Rail Supply Group, who explained how the Rail Sector Deal is based on four pillars, which together will transform the UK’s rail industry for the better – Digital Railway, Data, Sustainable Railway and Exports. 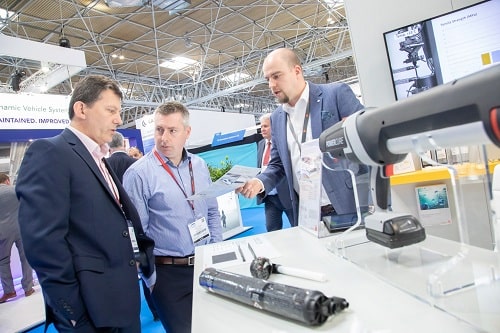 The comprehensive supporting programme included the Seminar Theatre, featuring a range of interactive forums, topics and discussions, and the Knowledge Hub, which hosted a selection of project updates and industry briefings. Among speakers were Network Rail’s Managing Director for the Group Digital Railway Stuart Calvert, who spoke on Devolution and the Digital Railway; HS2’s Supply Chain Manager Robin Lapish, who discussed supply chain opportunities on the landmark project; and Clair Mowbray, Chief Executive at the National College for High Speed Rail (NCHSR), who was speaking on the topic Taking Action on the Skills Shortage in the rail industry.

Railtex 2019 also featured a brand-new Future Focus Conference, bringing together a whole host of speakers to cover the key challenges and opportunities that UK rail will face in the coming years. This included; keynote addresses from Crossrail 2’s Head of Commercial and Controls, Simon Adams; Digital Railway’s Head of Strategy, Franchising & Sponsorship, James Drury and a lively Q&A with the Rail Minister Andrew Jones MP.

During his speech at the Future Focus Conference on the second day of the show, Rail Minister Andrew Jones MP stressed the requirement for 50,000 new workers by 2033 to replace retiring workers and explained that the industry needs to adapt to changes in technology. He also issued a call for more digital skills and workforce diversity in the rail industry.

Digital rail placed under the microscope
Digital Rail brings much discussion around the industry, with Network Rail looking to create more capacity on an increasingly crowded network by modernising systems and adapting new technologies and innovations. The UK government has earmarked £450 million specifically for digital railway schemes, as part of an almost £48 billion investment in maintenance, modernisation and renewal of the rail network by 2024.

The digital age was placed under the microscope at Railtex 2019, with the Birmingham Centre for Railway Research and Education presenting its Digirail project, which supports organisations working in the industry’s supply chain.

There was also a busy panel discussion at the Future Focus Conference entitled ‘Digital Journey’ featuring key members of Network Rail’s Digital Railway programme, discussing the challenging and opportunities that lie ahead for the programme.

Predictive maintenance and the Internet of Things
As the rail industry moves towards a digital future, companies are increasingly looking to utilise data to identify potential cost savings and manage maintenance issues in real time. Exhibitors at Railtex were keen to showcase their solutions, with California-based software company ETAP presenting the eTraX Rail Traction Power system, which utilises advanced geospatial asset information to allow for the modelling, simulation, prediction and optimisation of rail infrastructure.

The ‘Internet of Things’ (IOT) has been the driving force behind reliable passenger connectivity and this was proudly demonstrated by Nomad, the pioneer of the Intelligent Train – a shared and secure network infrastructure that allows on-board systems and passenger devices to connect and interact, improving passenger satisfaction and increasing operational efficiency.

Looking to a green future
Despite being seen as a low-carbon, environmentally-friendly way to travel, the rail sector is striving to remain the leader of sustainable transport – as was evident at this year’s Railtex.

A big hit with many visitors was Alstom’s exhibit, that presented its model of its hydrogen train design Breeze, emitting only water and no harmful emissions at all.

Meetings to facilitate exports
Exports have been referred to as one of the biggest challenges of the Rail Sector Deal. A unique feature at this year’s Railtex was the ‘Meet the Commercial Officer’ event, organised by RIA in partnership with the Department for International Trade. Taking place on Tuesday 14th and Wednesday 15th May, the event allowed suppliers to meet with DIT trade experts from around the world, providing first-hand knowledge of current and future rail opportunities. In total 51 organisations took part in over 100 pre-arranged meetings with representatives from 14 different countries including the Baltic States, Canada, Finland, Kenya and Sweden to name a few.

Railtex returns to Birmingham in 2021
Railtex will return to the NEC in May 2021. There has already been very strong demand for stand space. Following the success of the show, over 100 companies have confirmed their participation in Railtex 2021, with 30% of stand space already reserved.

What exhibitors had to say about Railtex 2019
Nick Brailey, UK Marketing and Communications Manager at Knorr-Bremse, said: “We’ve exhibited at Railtex longer than I can remember. We’ve made the move with the various locations. I think it’s essential to be at Railtex. It is the industry show for the UK, it’s the chance to meet with colleagues, potential customers. It’s a great way of showcasing a whole range of products.”

Robert Swadkin, Production Director at Solo Rail Solutions: “Railtex 2019 has been even better than 2017. We’ve had quality conversations with visitors to the stand and made some excellent contacts. Our activity has created an improved market perception and we’ve discussed much larger contracts.”
Baylea Barber, HR Officer at Solo Rail Solutions: “There was a huge variety of exhibitors at Railtex 2019 and it was a great opportunity to network. It was a great atmosphere, everyone has been really friendly and interested in our services – we built good contacts and leads to now follow up.”

Dr Nigel Jakeman, Engineering and Business Development Director at Turbo Power Systems, said: “Events like Railtex give us an opportunity to meet all of our different customers. For example, our new rail car builders, which are our top three customers, we get to meet them directly here.” 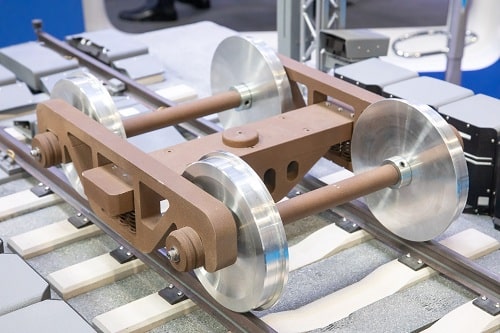 What visitors said about Railtex 2019
Dave Marsh, Director of Contracted Services, Harsco Rail: “Railtex has proved itself to be a really important show for the rail industry and for us at Harsco Rail. It has been well-organised, very interesting and insightful speaking to so many different companies in the industry and learn about innovations coming to the marketplace.”

“For me, it hasn’t just been great to catch up with some familiar faces, but also with new businesses and contacts, which could help us to continue to thrive in the future.”

Railtex 2019
Railtex is the essential showcase for products and services for the all sectors of the rail market in the UK. The show is held biennially and has successfully served this market for more than 25 years. It is organised by Mack Brooks Exhibitions (www.mackbrooks.com), which also runs the Infrarail series of railway infrastructure technology shows. Outside the UK, the company’s regular rail industry exhibitions include SIFER in France and EXPO Ferroviaria in Italy, as well as Exporail India.

Views from the Industry: The Drone Industry Barometer 2019

Views from the Industry: The Drone Industry Barometer 2019