On March 15, 2017, the splendid imperial Hofburg in Vienna was the imposing venue for the presentation of the â€˜HERMES Verkehrs.Logistik.

Preis 2017â€™, AustriaÂ´s most prestigious award for the transport and logistics sector. In a gala evening, the organizer of transport logistic received the Hermes Partner Award as the worldÂ´s leading organizer of logistics trade fairs.

Gerhard Gerritzen, Member of the Management Board of Messe MÃ¼nchen, is delighted: â€œFor us as an organizer of trade fairs, this award is of course a special honor, and it shows that our trade fair transport logistic is a valued partner for the entire transport and logistics sector in Austria. This is also shown in the fact that this year again all AustriaÂ´s leading companies will be putting on a presentation at the show in Munich.â€

The â€˜HERMES Verkehrs.Logistik.Preis 2017â€™ is an initiative organized by the Austrian Economic Chambers (Section Transport and Communications), in cooperation with the Austrian Federal Ministry for Transport, Innovations and Technology, the Allgemeine Unfallversicherungsanstalt (AUVA), Ã–BB Infrastruktur AG, Semperit and LOGISTIK.Kurier. The award is presented to forwarding and logistics companies in the five categories of Training/Education, Sustainability, Security, Next Generation and Best SME. 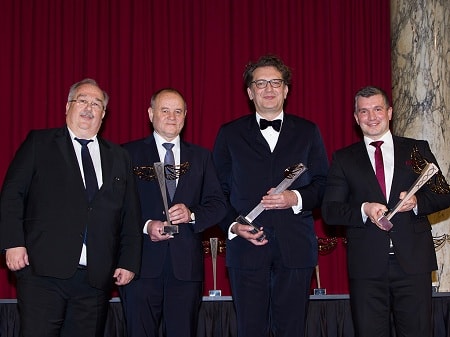 The next edition of transport logistic, â€˜International Exhibition for Logistics, Mobility, IT and Supply Chain Managementâ€™ takes place from May 9 to 12, 2017 in Munich.

Messe MÃ¼nchen
With a stable of more than 40 trade fairs for capital goods, consumer goods and new technologies at its Munich site and abroad, Messe MÃ¼nchen is one of the worldâ€™s leading trade fair organizers. Every year over 30,000 exhibitors and around two million visitors take part in the events on the exhibition site, in the ICM â€“ International Congress Center Munich and in the MOC Veranstaltungscenter MÃ¼nchen. Messe MÃ¼nchen also organizes trade fairs in China, India, Turkey, South Africa and Russia. With a network of affiliated companies in Europe, Asia and Africa and with more than 60 foreign agencies for more than 100 countries, Messe MÃ¼nchen has a global presence.

Hertfordshire Logistics Firm Drives into 2023 with Badge of Excellence