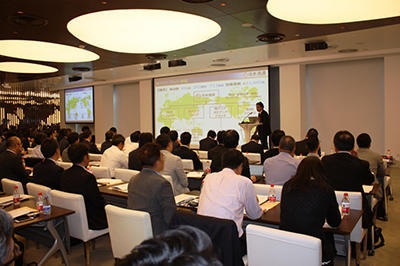 This symposium was held as one of the efforts being made in connection with the FY2018 “Business Feasibility Study Project for Overseas Development of High-quality Infrastructure (Study on Improving Hard and Soft Infrastructure to Promote Utilization of the China Land Bridge)” being carried out by Nippon Express at the request of the Ministry of Economy, Trade and Industry.

In this symposium, Nippon Express briefed the participants on the status of rail transport operations using the rail network connecting China and Europe, and solicited participation from the attending Japanese companies in a block train set to depart Xian in December that Nippon Express will be organizing and operating as one of 14 studies on transportation conditions.

Nippon Express Managing Executive Officer Tatsuo Sugiyama told the audience: “We want to identify the anxieties and doubts that Japanese companies have on the benefits of rail transport, and then move forward with demonstration trials to satisfy the expectations of Japan and Japanese companies.”

In 8 Years, Indian Port Capacity Doubled, As Per PM Modi